A year ago, the National Archives in Paris hosted an exposition titled La Collaboration Vichy Paris Berlin 1940-1945: a look back at the Vichy government’s cooperation with the Third Reich during the World War II German occupation of France. The walls were a smorgasbord of unnerving historical video footage, clippings and mementos, but none proved to be as jarring to the sensibility of a millennial as the propaganda poster goading French citizens of respectable faiths, and of all ages, to stone their local Jew*. The undeniable triteness of the message evidence of the poisonous atmosphere that fostered the events which so deeply scarred the 20th century. 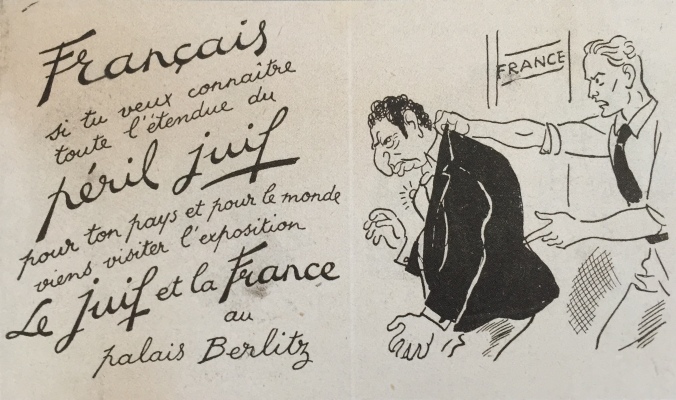 A promotional poster for a 1941 exposition in Paris on how “the Jew has never been, cannot and will never be able to integrate himself with other people” titled, Le juif et la France. Source: La Collaboration: Vichy Paris Berlin 1940-1945.

Last week, several stories in the press evoked the latent danger of rendering the marginalization of a people into more and more frequent soundbites. This time not against Jews, but against the even larger population of people of Muslim faith. We started the week with a €6 billion tit-for-tat migration agreement between the European Union and Turkey going into effect, in which for every irregular migrant deported from Greece back to Turkey, the EU will resettle a Syrian refugee in Turkey on European soil. Leaving aside the controversies related to the deal itself, the very reason it transpired was due to the failure of the EU to figure out what the “Union” part of its name means. A consequence, no doubt, of individual state’s fears over migration – specifically, the migration of Muslims – into their pristine, largely Christian populations, and their subsequent decision to jump ship and protect themselves.

Rather than recognize the Syrian War as the Syrians’ time of need and using the billions pledged to Turkey towards a European-wide humane refugee resettlement programme, criticisms abound as to how Syrians will be a tax to already burdened national social systems; how their beliefs and values will prevent them from integrating into European culture; how the refugee crisis has cleared a path for Islamist radicals masquerading as asylum seekers to enter into the heart of Europe.

The last of these arguments flared again when Brussels was the victim of a two-pronged attack last Tuesday by a jihadist cell, reportedly acting on the direction of ISIL. While the migrant route does present a vulnerability, and one of the Paris attackers did enter the EU using a fake passport via the Greek island of Leros, some perspective is needed here. For one, most of the attackers so far, starting from Charlie Hebdo in January 2015, have been homegrown. So, even those who are returning from a stint in Syria could be allowed entry into Europe with barely a second glance given between photo ID and physical being. Secondly, even when the Belgian Ibrahim El Bakraoui, one of the two suicide bombers at Brussels’ airport, was flagged by Ankara as having radicalist ties and deported back to the EU, the Belgian authorities failed to observe the red warning light flashing before their eyes. The blocking of the migration route into Europe will have little, if any, effect on hindering future terrorist attacks. Terrorism will continue to afflict Europe because it has allowed the creation of a disenfranchised minority of born and bred European citizens who have little by way of opportunity; because ISIL appears to be extremely well-organized and financed at present; and because Europe lacks a well-trained, well-networked, federal anti-terrorism investigative unit.

None of these points seem to have found their way into the myopic thinking of US Republican presidential candidate rivals, Donald Trump and Ted Cruz. Upon news of the Belgian attacks, the first renewed his wholly-credible pledge for a ban on all Muslims entering the US. The second decided a more internal approach is necessary by calling for systematic surveillance of Muslim neighbourhoods. A fear of jihad has permitted the thinking and vocalization of a distrust of all Muslims to become acceptable, and the rhetoric we are hearing from both European and US politicians – applauded by some of their electorate – is well on its way to resembling a poster urging us to throw stones at our Muslim neighbours.

That brings us to our final press-pick of the week: the 40 year sentence handed by the International Criminal Court to Bosnian Serb leader Radovan Karadzic for war crimes committed during the  Bosnian War of 1992-1995, including his complicity in the genocide of Muslim Serbs in the massacre of Srebrenica. Nazi-sympathetic World War II memorabilia might seem too far-fetched and distant a parallel to the hate-filled anti-Muslim speech of today, but the ethnic cleansing of more than 8000 Muslim men and boys was merely 20 years ago. (To put that into perspective: Friends was embarking on its second season). If that’s still too obscure an event, here’s a video of a Neo-Nazi group disrupting the shrine to the victims of the Belgian attack yesterday.

So, before Generation Z and beyond are gasping in horror at sound reels from present-day media, and another 7 year long trial at the Hague is necessary, let’s call a spade a spade and recognize our anti-Muslim banter for the poisonous discourse it really is.