It’s difficult to keep track of whose fighting whom in today’s Middle East without risking an aneurism. Let’s begin with Syria: on one side of the battlefield, we have the country’s leader/dictator, Bashar Al-Assad, who has been battling rebel groups, as well as the Islamic State of Iraq and the Levant, for a 5th year running. On side nº 2, Syrian rebel groups have been trying to topple the Assad regime and put a stop to the growing problem of ISIL. And on side nº 3 there’s ISIL and its quest to vanquish all in its path to establishing a Caliphate. One border over, the Iraqi army is working to push back the jihadist group from its territories. The Kurds are doing the same closer to the Turkish front, but are also under attack by Turkey itself, which seems to value its longstanding enmity towards the Kurds above its interests to protect its own borders and stymie a refugee crisis.

In the skies, an American-led coalition is targeting ISIL strongholds; as is Russia, though the latter is using this claim as a pretense to send a few bombs the Syrian rebels’ way. Elsewhere in the immediate vicinity, a Saudi Arabian-led intervention has been bombing Yemen since last March, while the Taliban are still actively wreaking havoc in Afghanistan. That’s the bare-bones view, with a few countries and groups left out of the picture to help simplify matters. Amid the mayhem, there is a sense that the overriding enemy is ISIL. A terrorist organization that has no limits in its ambition to impose its twisted interpretation of Islam on all who have the misfortune to become its subjects, and terrorize those whose beliefs and lifestyles challenge its own.

But if ISIL can be crowned the Middle East’s Lord Sauron, then many of the remaining players are the runners-up. There’s no unwitting Frodo-like hero staving off evil in Bashar Al Assad – a dictator who clings to power by means of chemical warfare against his own people. No brave, moral souls fighting to protect others among the Saudi Arabians – who have not only used cluster bombs* in Yemen, but also boast an unsightly track-record of human rights abuses back home. And what of the US and Britain? The assumption that the two Western powers are the valiant knights of the whole affair can be remedied by one step back down memory lane: who was to blame for instigating the Iraq War, the mismanagement of its aftermath and the vacuum that gave rise to ISIL? In short, events in the Middle East have become so overwhelming due to the absence of a Fellowship of the Ring equivalent that could add the easily digestible concept of good vs. evil to the equation.

A story appearing in last Friday’s Le Monde** distances us further from such a childish wish for simplicity in battle. According to the French daily, Syria’s largest gas plant has been under the joint control of the Syrian government, Hesco – the local partner of  Russian company Stroytrangaz (to whom the construction of the plant was awarded back in 2007) – and none other than ISIL itself. While a collaboration between the Assad regime and Russia is to be expected considering Putins’ support of a fellow dictator, learning of the third-party tie to ISIL definitely qualifies as a WTF? moment in this ongoing saga. 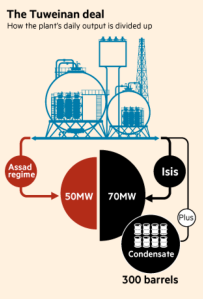 That Putin has no scruples backing Al-Assad who has done nothing to offend Russians, despite being a canker to his own people, is one thing. It’s quite another to be in cahoots with the organization responsible for bombing a planeful of Russian citizens. Yet this is exactly the claim brought forward by Le Monde – and previously by the Financial Times  and Foreign Policy – which reports that in 2015, the government (and consequently, Hesco and Stroytrangaz) agreed to pay ISIL €72,000 per month in exchange for protection of the Tuweinan plant; later agreeing to a 70 MW to 50 MW split, in ISIL’s favour, of production from the Aleppo power station powered by the Tuweinan plant.

To revert to the Lord of the Rings analogy, it would be as if the people of Gondor were in league with both the Orcs and Lord Sauron over mining rights, all the while battling to kill each other off. Although this is the only account of a case involving a foreign party directly engaged in the conflict, dubious deal-making for the control of energy plants has been reported throughout Syria between the state, ISIL, and rebel groups. Arriving at a deal doesn’t, however, signify a mutually-respected agreement, nor non-violent working conditions for the plants’ workers. Workers can receive 75 lashes for any deviation from “strict Islamic practice”; and, if that isn’t considered severe enough HR management, on-site executions can also be arranged***. In some ways, that’s a relief. The knowledge that gas rights – rather than good judgment and morality – could turn an abject human being into a decent one would probably trigger that aneurism.