A piece of good news in the media is like sunshine in the UK: you need to stop whatever it is you’re doing and bask in its warmth. Otherwise, you’re just stuck looking at an endless world of grey. So bask we shall in the news that the Irish voted a resounding Yes for same-sex marriage last Friday, in the first ever referendum of its kind. 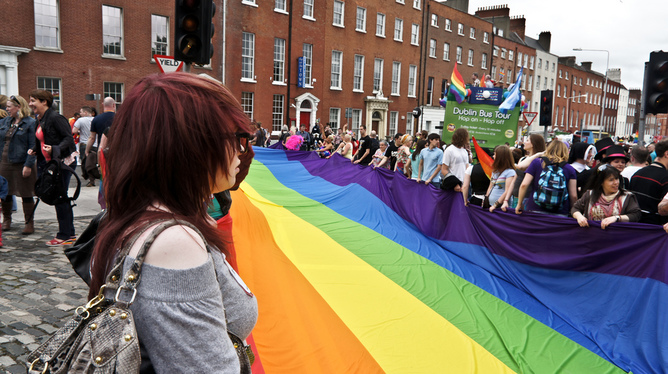 If you watched the movie The Imitation Game earlier this year – based on the life and work of the mathematician Alan Turing – you’ll have received a stark reminder on what it meant to be gay in 1950s Britain when male* homosexuality was a crime. [Spoiler alert: If you haven’t watched the movie, or are otherwise unaware of the intimate history of World War II code breakers, skip to the next paragraph]. Convicted of “gross indecency” with another man in 1952, Turing opted for the prison alternative of chemical castration. Two years later, he committed suicide for reasons (we can presume) that stumped his contemporaries.

It wasn’t until 1967 that homosexuality was “lightly” decriminalised (i.e. if you were discreet about it and respected the higher age of consent of 21, bygones were bygones) and then 1982 for full decriminalisation to take effect in the UK. That feels like both a life time ago and no time at all. Ireland only decriminalised homosexuality in 1993.

A very long segue way to point out just how significant a vote favouring same-sex marriage is for Ireland. What’s more, for a country with a majority Catholic population (at 84% of the population, Ireland comes in 11th on the list of the world’s most Catholic countries – and that includes Vatican City at 100%), the Yes vote passed very comfortably with 62%. On an individual level it would be a transition equivalent to Bono turning around now and saying, “Fuck feeding the world, fuck HIV and fuck Africa.” Actually, given LiveAid was in ’84, the timeline is a bit off: it would be equivalent to Bono having turned around 9 years ago and saying that. (Think about it. That would mean no (PRODUCT) RED™ motivational quotes to “Shop, Act, Learn”).

Some within the Irish Catholic church have expressed a willingness to move towards the brighter light of 21st century thinking and reform. And, considering Pope Francis’s “whom am I to judge?” comment a couple of years ago, we could be forgiven to think that we’re on the brink of an age when a person’s sexuality is a non-issue. But, alas, the Vatican’s Secretary of State delivered a statement on Tuesday reminding us not to get ahead of ourselves. Cardinal Pietro Parolin, apparently number two in the Holy See’s hierarchy, said of Ireland’s popular vote:  “The church must take account of this reality, but in the sense that it must strengthen its commitment to evangelisation. I think that you cannot just talk of a defeat for Christian principles, but of a defeat for humanity.”

Yes, clearly, among the long list of recent human achievements**, this is what constitutes a defeat for humanity. Unfortunately, the Cardinal is not alone in his sentiments. One prominent No campaigner with an equal flair for the dramatic and an unwillingness to lose gracefully was quoted as saying, “I cry for Ireland.” The main argument for No campaigns everywhere is that same-sex marriage threatens the notion of the nuclear family. They reiterate that a child needs both the love of a mother and a father with the help of little blue and pink paper-cut visual aids and that the remodeling of the family would amount to “inequality for children” (see video below, courtesy of the Iona Institute for Religion and Society).

If that was the only reality for children from heterosexual parents, then great, at least they’d have the beginning of a sound argument. But, let’s not pull ourselves back into a debate that has already been brought to its conclusion – at least in one more country.

Despite the many many battles that still have to be won – not just for marriage equality, but for the right to live openly as an LGBTI person in countries as varied as Uganda, Russia, Greece and Saudi Arabia – let us bask in the sun  for just a few brief seconds longer. Sure enough, some distant cloud is fast approaching.

* Oddly enough, women were off the hook, at least in terms of the written law.

** Starting from January 2015: (1) continuing to kill in the name of religion (might not be predominantly for Christianity now, but still); (2) the Yarmouk camp and the Syrian refugee crisis as a whole; (3) the perishing of thousands of migrants at sea; (4) the persecution of the Rohinga people; (5) human trafficking worldwide; (6) allowing Sepp Blatter to run for a 5th term at FIFA…