This might be considered old news in France, but as international papers just recently picked it up (blame the lag in translation) and it involves an ongoing story, this week’s Pick of the Press looks at extramarital dating website, Gleeden.

In France, Gleeden and its bitten-apple logo have achieved household status thanks to an extensive ad campaign, splashed across city buses and metro stations, which unabashedly promotes the virtues of having an affair. One billboard calls on victims of unhappy marriages to look at an affair as some twisted form of patriotic duty by helpfully pointing out that taking a lover costs less to social security than anti-depressants. Another opts for a more visual message and simply shows a bride crossing her fingers behind her back. 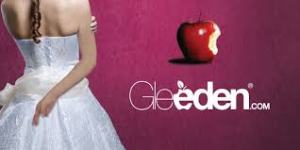 Made by women (mainly) for married women, the website has come under fire from the French Catholic Family Association, which views the dating site as a moral scourge – a threat to the social fibre holding together traditional family values – as though infidelity were a newly-hatched concept in the French Republic. In February, it filed a legal complaint against Gleeden and its American publisher, Black Divine, in a Paris superior court, claiming the website facilitates adultery and, as a result, wilfully breaches an article of the civil code that states spouses owe one another mutual respect, fidelity, and support. Moreover, by facilitating the adulterer, the CFA says Gleeden helps to “publicly promote duplicity, lying, and the violation of the law”.

If your beliefs are more liberally-inclined, it’s a bit horrifying aligning yourself (even remotely) with the thinking of one of the principal partner organisations of the French anti-gay marriage movement. Yet Gleeden’s message and mission don’t necessarily sit well even with those of us who don’t staunchly believe in the institution of marriage or its religious association. Its ads make having an affair seem simultaneously thrilling and – with a reported 2.5 million members – blasé.

No problem, if this was in the context of an open marriage or relationship. That not being the case, Gleeden’s business model aims to open the door as wide as possible for married women to cheat without any consideration made for the poor sob being cuckolded.  A spokeswoman, one (let’s go with Ms.) Solène Paillet who spoke with The New York Times, takes this a step further, proclaiming that the website is “a form of justice since Frenchwomen ha[ve] suffered the indignity of cheating men for centuries while historically bearing the brunt of punishments for infidelity”. In her own words, Gleeden’s all-female creative team “want[s] to give women a means to cheat on their husbands and to be sexually independent”. Vive la France et le féminisme ! The only chink in her glorious quest to add to female independence is that the site also caters to their husbands.

Even so, with affairs having been decriminalised in France back in 1975, the Catholic Family Association’s legal complaint is clutching at straws. By its logic, any hotel clerk who gave a room key to a married Dominique Strauss-Kahn should be sued for violating the civil code. What’s more, by asking transport authorities to ban the ads (some of whom have acquiesced), the CFA is obstructing freedom of expression: itself a pillar of the French constitution.

Then again, you could forgive the CFA for confusing what does and does not constitute freedom of expression these days. When the 12 members of the satirical weekly, Charlie Hebdo, were gunned down in January for depicting the Prophet Mohammed, French leaders linked arms with government representatives of* Russia (intimidator/alleged terminator of independent journalists and opposition members), Egypt (world-renowned prosecutor of journalists), and Saudi Arabia (medieval punisher of pro-democracy citizens), among others, to march against terrorism and in support of press freedom. Two days later, controversial French comedian, Dieudonné M’bala M’bala, was arrested for posting a comment on Facebook that voiced sympathy for the gunman and hostage taker, Amedy Coulibaly. All things considered, the CFA might want to think of widening its legal complaint against those “publicly promoting duplicity” beyond the scope of Gleeden.

One thought on “French freedom of expression: anything goes…as long as it doesn’t lead to an affair?”